We study the molecular mechanisms that define the extent of transcription units generated by RNA polymerase II (Pol II) across mammalian genomes. Especially how do protein coding transcripts differ from long noncoding transcripts in their mode of synthesis and coupled RNA processing? 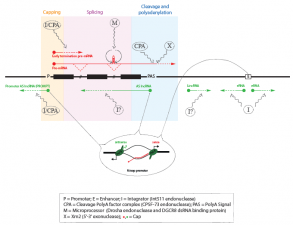 As shown in the diagram, protein coding transcripts (in red) are separated into exonic and intronic sequence and subjected to a variety of co-transcriptional RNA processing reactions to generate translatable mRNA; 5’ end capping, intron removal coupled to exon ligation (splicing) and 3’ end cleavage and polyadenylation (CPA). Added to these well-established steps in mRNA synthesis, several additional co-transcriptional RNA processing mechanisms operate, as actively investigated by our research group. First, a fraction of Pol II transcript prematurely terminates at either cryptic polyA signals (PAS) or through transcript cleavage mediated by the Integrator complex (I). Second hairpin structures may be excised from introns by the microprocessor complex (M). This releases pre-microRNA that are subsequently converted into microRNA by cytoplasmic Dicer. Third CPA cleavage at the gene 3’ end not only promotes release of polyadenylated mRNA, but also exposes nascent transcript to 5’->3’ exonuclease activity by Xrn2 (X). This ultimately forces termination of Pol II from the gene template by the torpedo mechanism.

All aspects of these coupled transcription and RNA processing mechanisms are under active investigation by our research team and are funded by a recently secured 5 year Investigator Award from the Wellcome Trust (April 2021-March 2026). 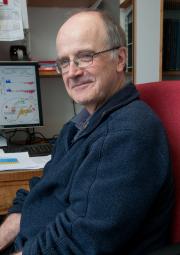 Function of R-loops in health and disease