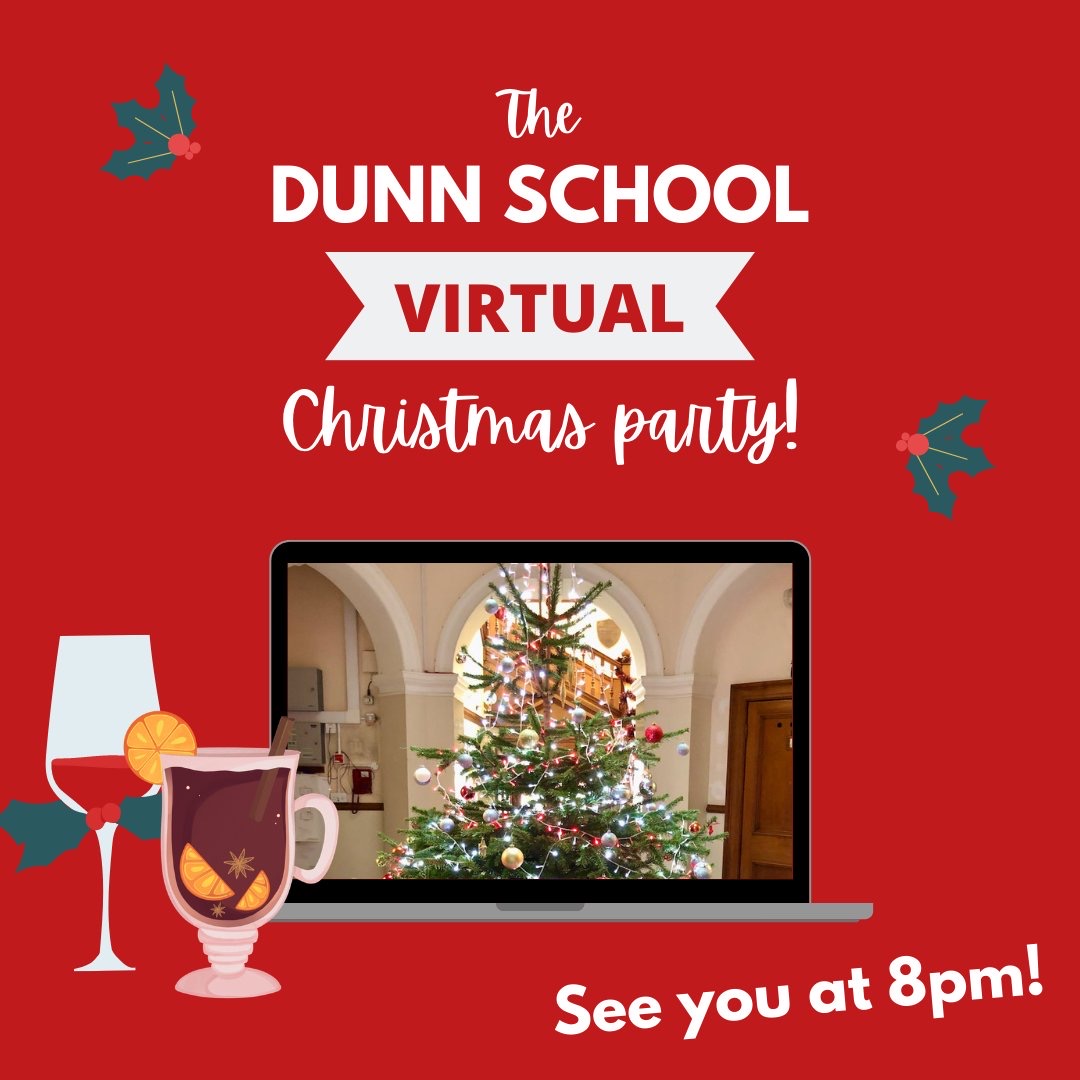 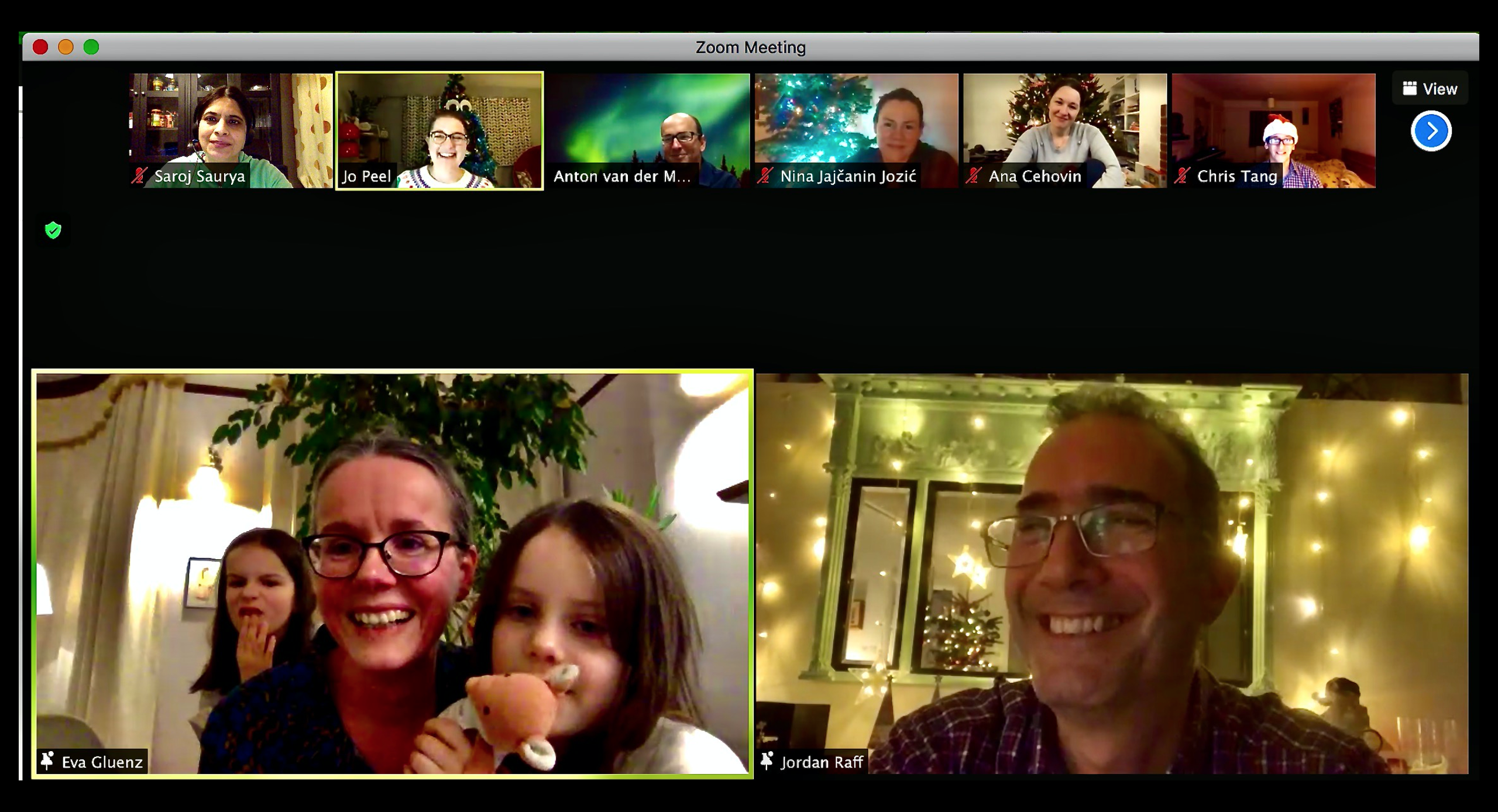 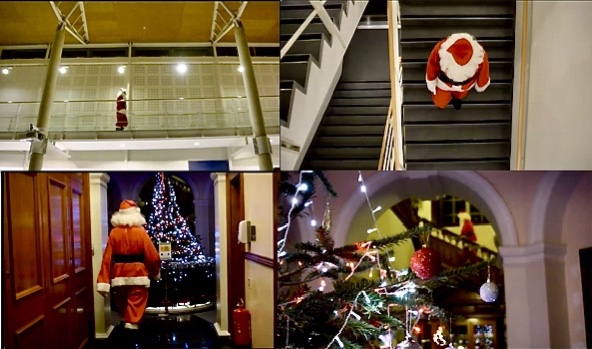 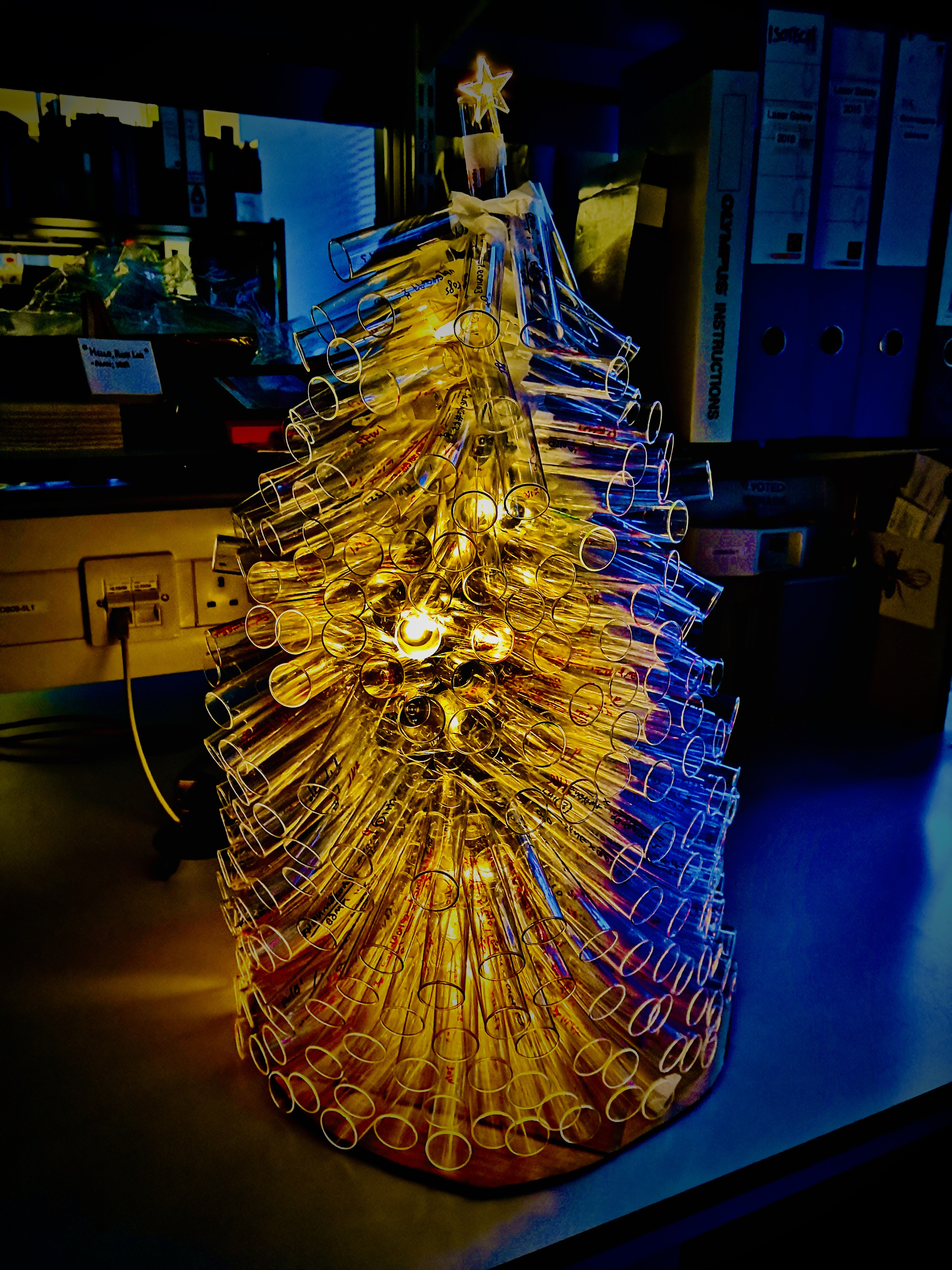 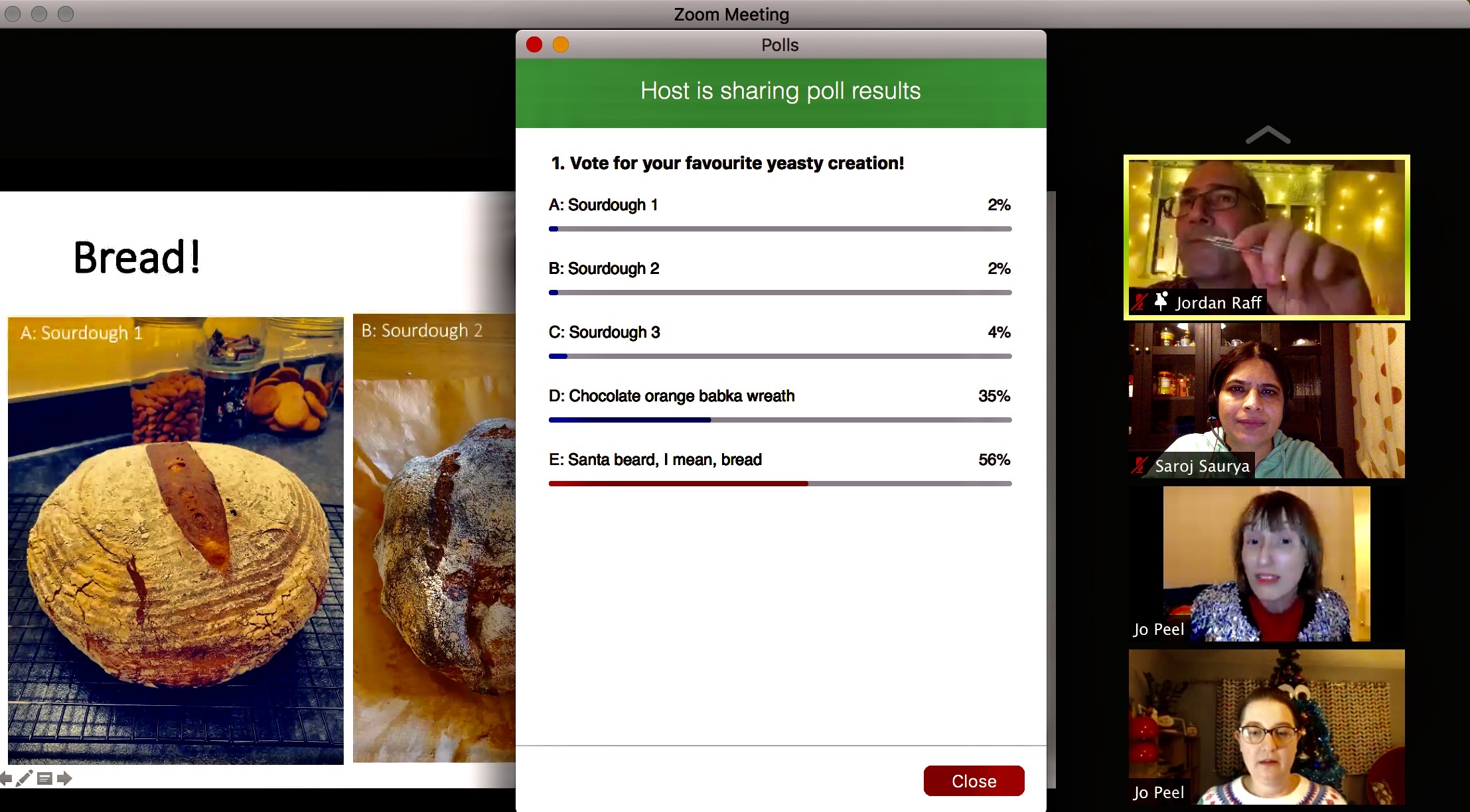 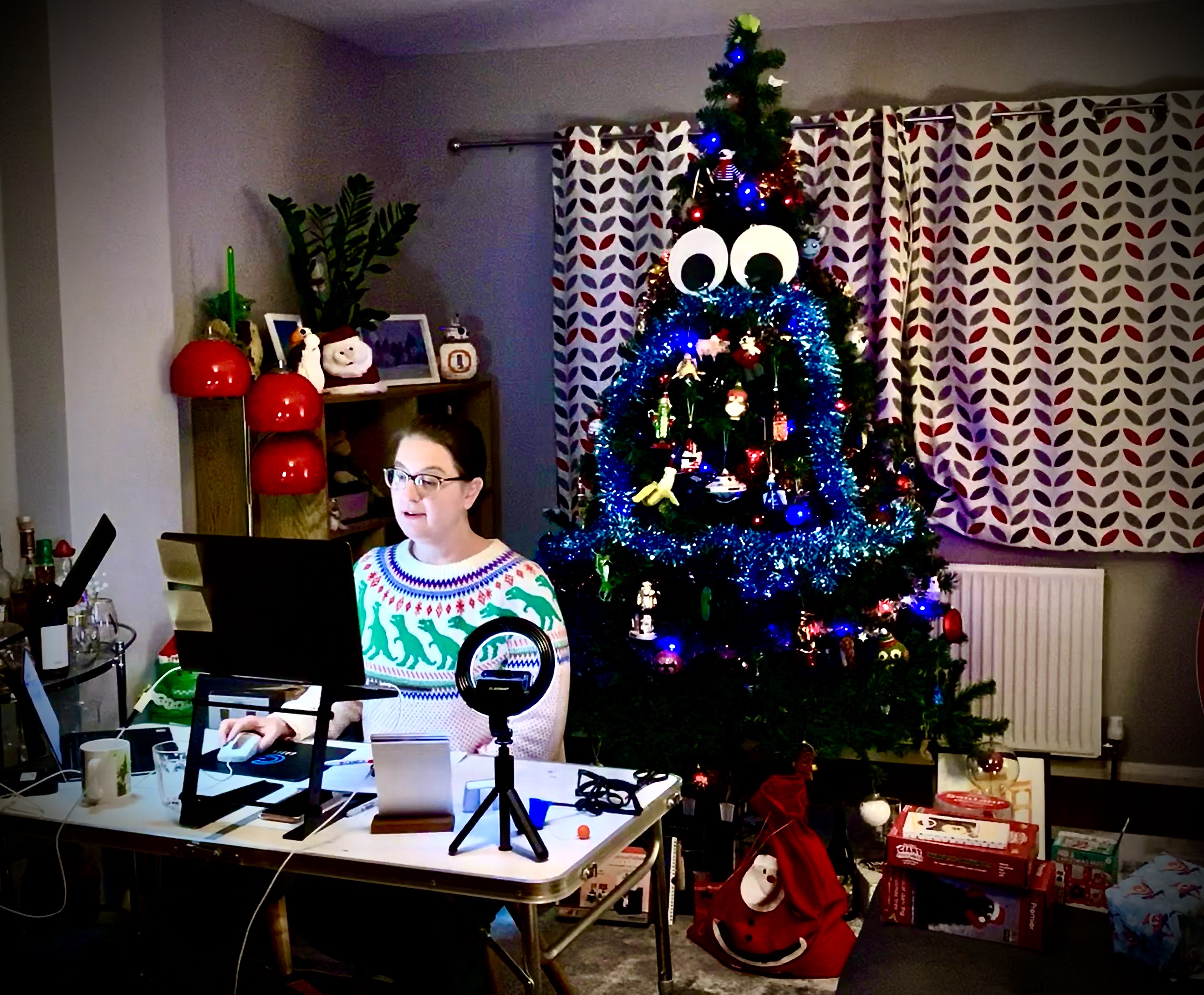 Despite a global pandemic and in-person restrictions, the Dunn School of Pathology managed to keep alive the tradition of a department-wide festive gathering by successfully shifting the annual Christmas party online for the first time on December 11th, 2020.

Over 100 Dunn School colleagues attended the Zoom Christmas Party organised by Dr Errin Johnson and the Bioimaging team. The event was hosted by Errin and Professor Jordan Raff.

Head of Department Matthew Freeman said: “Social media made it clear it was a huge success. The Dunn School achieved the apparently unachievable: a really fun Zoom party. Another big tick in the spirit of the Dunn School box.”

A magically festive video recorded in the deserted department featuring Santa Claus aka the Head of Department kicked off the night.

The traditional food competition, which was decided in previous years by a selection of judges, took advantage of Zoom audience polling to determine the winners of the best dishes in each category: Meat, Vegetarian, Bread, and Cake/Non-cake Sweets. Images of all entries were displayed and voted on. The winning chefs in each category (Clemence Levet, Hana Veler, Errin Johnson, Catarina Vincente, and Charlotte Melia, respectively) won a variety of cookbooks to further their culinary skills. Alan Wainman and the Raff lab won the Christmas decoration competition for their environmentally friendly “O come all ye fly vials” Christmas tree, constructed of recycled fly vials.

Attendees were divided up into teams to compete in an online quiz in Zoom breakout rooms. The quiz included questions about arcane topics such as fruitcake origins, as well as questions on where certain items were located in the Dunn School. Due to technical issues slowing down the assignment of teams, the quiz began with several smaller teams competing against one large mega-room of competitors waiting to be assigned a Breakout Room; eventually however, three joint winners emerged: Gruneberg & Gullerova groups (plus others), Molecular Immunology Group & Dushek group (plus others) and Robertson, Raff & Vaux Groups (plus others).

The annual Christmas raffle followed, which raised £1,847 for The Gatehouse, a local charity that provides food and support to homeless and vulnerably housed people. Combined with the budget for the Christmas party usually dedicated to entertainment and refreshments, the Dunn School donated just over £3,000 to The Gatehouse. Raffle prizes were purchased with the generous donations of Dunn School PIs and sponsored by Oxford Instruments and Qiagen.

Finally, the party concluded with a “Beyond Dunnderdome” games segment showing competitors in their homes using props to strive for glory. For example, contestants raced to open wrapped gift boxes while wearing oven mitts. Charlotte Melia bested David Greaves in the final round to win the crown.

All in all, the online Christmas party was a resounding success, filled with exciting and entertaining banter between the two MCs, Errin and Jordan.

“Thanks goes to everyone involved and especially to Errin Johnson,” said Head of Department Matthew Freeman. “The party wouldn’t have happened without her - she enthusiastically and tirelessly put hours of her free time into organising it.”