Tissue macrophages, including the microglia in the brain, act as critical sentinels to defend us against infection. Consequently, pathogens such as HIV have developed ways of circumventing the defensive functions of macrophages in order to establish chronic infection. Moreover, their persistence in macrophages appears to generate chronic inflammatory reactions, that may lead to the dysfunction of neighbouring cells, such as neurons, and result in neurocognitive disorders. In order to dissect the molecular pathways involved in these processes, we have developed human iPS cell-derived tissue models for macrophages, microglia and neurons, and use high-efficiency Cas9-based gene editing methods to investigate the contribution of individual components. We also work extensively with neuroscience collaborators on the neuroinflammatory aspects of Parkinson’s disease and Alzheimer’s disease.

The Oxford Stem Cell Facility, based in our lab, is headed by Dr Sally Cowley. Her team generate, edit, curate and differentiate dozens of iPS lines as part of multi-centre collaborations to investigate the pathogenesis of neurodegenerative and related disorders. They develop sophisticated differentiation and tissue culture models of cell types of interest in these fields, and use them with translational scientists to identify new therapeutics. 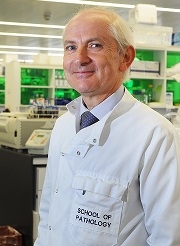 Development and Stem CellsInfection and Immunity