The CTD of RNA polymerase II and elongation checkpoints

During transcription of both protein-coding and snRNA genes by RNA polymerase II (pol II), transcription and RNA processing are tightly coupled. Our most recent work has focused on understanding the mechanics of this connection.

Pol II itself is a key player in this coupling and can profoundly influence how factors are recruited for transcription and RNA processing. The largest subunit of pol II has a very unusual structure at the C-terminus called the carboxyl-terminal domain or CTD, with 52 repeats of the consensus heptapeptide tyrosine/serine/proline/threonine/serine/proline/serine or Y1/S2/P3/T4/S5/P6/S7 for short. Intriguingly, each of the amino acids can be modified; tyrosine, serine and threonine by phosphorylation and proline by isomerisation and all modifications have been identified in living cells (1). There is, therefore, the potential for a very large number of different combinations of modifications along the CTD.

One of the enzymes involved in phosphorylation of S2 of the pol II CTD, P-TEFb, also controls the ability of pol II to pass an early-elongation checkpoint. Using inhibitors of the CDK9 kinase subunit of P-TEFb, we have mapped early-elongation checkpoints on pol II-transcribed genes genome-wide. Surprisingly, this analysis also uncovered a hitherto-unsuspected kinase-dependent checkpoint close to the poly(A) site. This second checkpoint could provide the opportunity to rapidly regulate gene expression by terminating pol II just before the production of a polyadenylated mRNA; the point of no return. We have already shown that CTD phosphorylation changes and some polyadenylation/elongation factors are lost from the region of the poly(A) site when cells are treated with CDK9 inhibitors. We are currently investigating the molecular mechanism underlying this novel transcription elongation checkpoint. 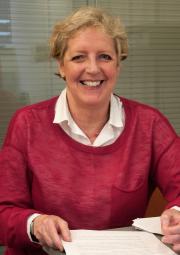