A defining feature of eukaryotic cells is the presence of a variety of membrane-bound organelles. Each one of these organelles has a specialized set of functions and a unique identity conferred by a distinct set of lipid and protein molecules. Our lab studies how organelle identity, function and architecture is generated and maintained in the dynamic environment of the cells. We expect to gain mechanistic understanding on fundamental questions of cellular organization. Ultimately our studies may also bring insight on the molecular basis of certain pathologies. 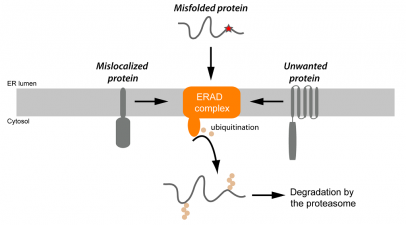 Roles of ER-associated protein degradation in ER organization and homeostasis

The endoplasmic reticulum (ER) is the largest membrane-bound organelle in cells and carries out several essential functions, such as the biogenesis of the most membrane and secreted proteins through which cells communicate with their environment. The ER also produces most lipids used to build cellular membranes and to store energy. In addition, it assembles the nuclear envelope, which allows the separation of nuclear and cytoplasmic events. A major focus of the lab has been to understand how these ER functions are regulated by ubiquitin-dependent proteolysis, in particular through a pathway called ER-associated degradation (or ERAD). This pathway promotes the degradation of misfolded proteins in the ER and has been intensively studied using a few model substrates. Quantitative proteomics approaches recently performed in our lab revealed a much wider range of ERAD substrates. Among these are certain folded ER proteins that are degraded in a regulated signal-dependent manner and some mislocalized proteins. These studies indicate that ERAD also defines the functional ER proteome with key roles in lipid homeostasis and establishment of specialized ER subdomains. Which signals are recognized by ERAD components on different classes of ERAD substrates? What are the regulated ERAD substrates under different metabolic cellular states? Is regulated ERAD necessary for the transition between those states? These are some of the questions we are currently addressing.

The ER also has a direct role in the biogenesis of other organelles, such as lipid droplets (LDs). These are ubiquitous organelles involved in storage of neutral lipids, with a key role in cellular lipid homeostasis and important connections to common diseases like obesity and atherosclerosis. However, many fundamental aspects of LD cell biology remain elusive. By studying how LDs originate at the ER, we discovered a protein complex that stabilizes the contact sites between the two organelles. Interestingly, this complex contains the lipodystrophy associated protein seipin. The mechanism by which seipin controls ER-LD contact site is currently under investigation. We are also studying how other ER membrane proteins control LD biogenesis and behavior.

In our studies we take advantage of a variety of approaches. We regularly use quantitative proteomics, genetics, biochemistry and imaging tools using yeast and mammalian tissue culture cells as model systems. 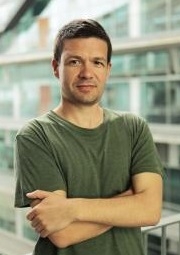