My group studies the mechanisms by which leukocytes, such as T cells, use cell surface receptors to recognise infected or otherwise abnormal cells. The T cell receptor (TCR) plays a major role in this process by probing the surfaces of cells for the presence of 'foreign' peptides presented on MHC molecules in a peptide-MHC (pMHC) complex. A major focus of our work is to understand how the binding of TCRs to foreign pMHC leads to T cell activation. The first step in TCR signal transduction following ligand engagement is tyrosine phosphorylation of the TCR/CD3 complex, which we term triggering. Simon Davis and I have proposed a new mechanism of TCR triggering, termed the kinetic-segregation model. It postulates that TCR binding to pMHC segregates the TCR, and the tyrosine kinases that phosphorylate it, from tyrosine phosphatases with large extracellular domains such as CD45 and CD148. Unlike other proposed TCR triggering mechanisms this represents an entirely novel mechanism of signal transduction across membranes, delaying its acceptance. However, there is now a large body of evidence from my lab (e.g. Choudhuri et al, 2005 and Cordoba et al, 2013), Simon Davis's lab (Chang et al, 2016; Chen et al, 2021), and from several other labs (e.g. James & Vale, 2012; Schmidt et al, 2016) that strongly supports this model. 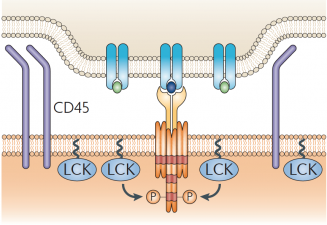 In the KS model CD45, which dephosphorylates the TCR, is passively excluded from close contact zones. TCR/pMHC binding segregates the TCR from CD45, sustaining phosphorylation (by Lck ) long enough for downstream steps to proceed.

A large number of leukocyte cell-surface receptors share key similarities with the TCR, suggesting that they signal by the same kinetic-segregation (KS) mechanism. These proteins, which comprise the largest group of leukocyte surface molecules, are termed non-catalytic tyrosine phosphorylated receptors (NTRs) or immunoreceptors. Over 150 NTRs have been described. One focus of our work is to investigate whether other NTRs trigger by the KS mechanism. We and others have shown that CD28, NKG2D, and the phagocytic receptors Dectin-1 and FcyR, use the KS mechanism. To expedite this research we have developed a novel generic ligand system to systematically investigate the triggering mechanism used by other NTRs.

Leukocytes express multiple NTRs, some of which are activating, like the TCR, while some, such as PD-1, are inhibitory. We are investigating the mechanisms by which activating and inhibitory NTRs integrate their signals when they engage ligands. We and others have shown that intimate-co-localization at the cell-cell interface is critical for this integration, and that NTR/ligand complexes need to span similar intermembrane distances to colocalize. We term this membrane-proximal signal integration, and suggest that it is likely to be critical for immune recognition. We are adapting our generic ligand system to systematically investigate signal integration between NTRs.

In addition to my research I am also the Director of Graduate Studies for the Department and I teach Medical and Biomedical Science Students.

Here are two recently-recorded lectures, part of a series of Henry Stewart Talks on The Immune System

A full list of my publications can be viewed on PubMed or Google Scholar. 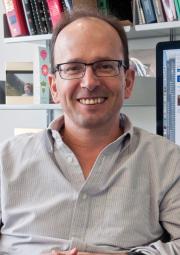