Reassessing the past: A new low to T cell receptors’ capability to recognise self-antigens

Reassessing the past: A new low to T cell receptors’ capability to recognise self-antigens 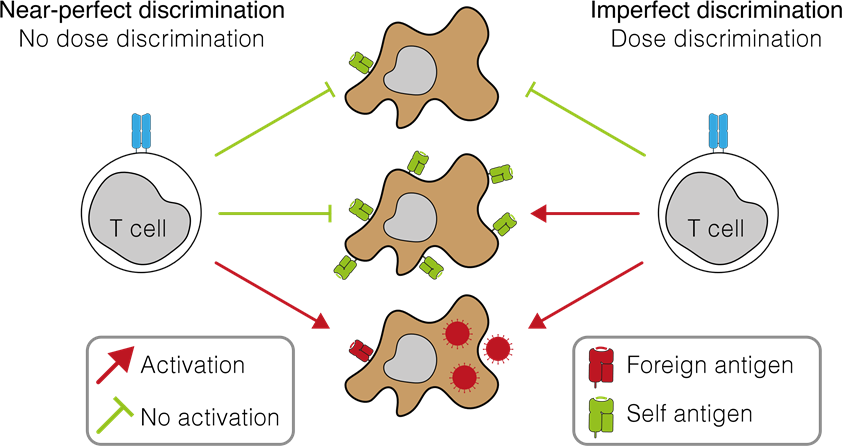 Immune cells in our body build protection against invading pathogens and eliminate tumours, and thus are essential for keeping us healthy. One particular important cell type in this process is the T lymphocyte, or T cell. T cells continuously circulate throughout the human body looking for abnormalities using receptor proteins on their surface called the T cell receptors (TCRs).

Cells within various tissues in our body can display signals to T cells and these are called antigens. They include signals derived from invading bacteria and viruses (foreign antigens) or sometimes signals derived from our own body (self-antigens). It is crucial that TCRs only activate upon binding to foreign antigens in order to prevent immune attack against the body’s own healthy cells, which can result in autoimmune disorders. Historically, it has always been believed that the TCR-antigen recognition system is near-perfect in distinguishing harmless self-antigens from potentially dangerous foreign-antigens. Mechanistically, T cells were thought to decide whether to mount an immune response or not by “measuring” the strength (or affinity) between TCRs and antigens. T cells would therefore only activate upon higher-affinity interactions (namely those with foreign antigens).

A new study published in eLife, co-led by PhD students Johannes Pettmann and Anna Huhn and Senior Research Fellow Dr. Enas Abu-Shah from the Dushek group at the Dunn School, demonstrated that T cells are actually imperfect at doing their job. In contrast to previous publications reporting much higher discriminatory abilities for TCRs, the new findings suggest that T cells can be activated even when they encounter very low affinity antigens.

Their discovery was only made possible due to the development of an improved method to measure the binding strength of TCRs and their antigens, especially those that have very low affinity interactions. These initial results were unexpected, so Mr. Pettmann explained that the group “further utilized previously published data from the literature to validate that these findings are not an artefact of the experimental system used, but truly reflect the biology of T cells.”

While low affinity antigens may not be able to stimulate a full immune response when expressed at low levels, the current study predicts full T cell activation upon increased expression levels. This has important implications for how T cell biologists think about the mechanisms behind T cell autoimmunity; rather than a defect in T cell activity, it may instead be associated with an inappropriate increase in expression of self-antigens in other cells. Similar increases in antigen expression are also evident in tumorigenic tissues.

The authors also explored ways to control antigen discrimination by TCRs in this study, and hence their discovery will provide an important resource to better design cancer immunotherapies in the future, as well as to re-assess our understanding of the disease aetiology of certain autoimmune conditions.

This study was a collaborative project with the Kennedy Institute of Rheumatology and the MRC Weatherall Institute of Molecular Medicine at University of Oxford, and Boston University in the USA.