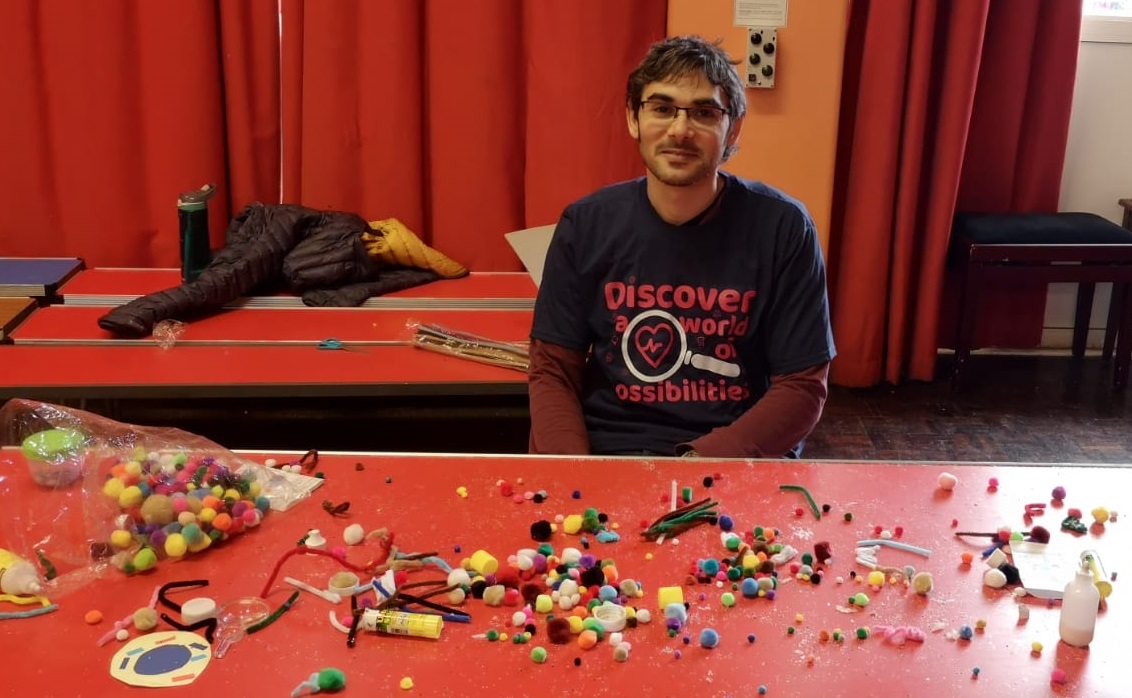 The cell and DNA were the topics the researchers focussed on. The Nieduszynski lab sent their winning team, Ana Wallis, Heather Jeffery, Simon Tyte and Dr Dzmitry Batrakou to spend one day in John Henry Newman Academy and one day in Freeland Primary School.

The researchers prepared a series of puzzles to ignite the curiosity spark in the pupils while learning about DNA. The older pupils got to play detectives for a day and identified a criminal based on DNA evidence. The team also gave the pupils a 3D model of the DNA bases and asked them to solve a jigsaw puzzle and figure out the chemical rules governing DNA assembly. Younger pupils were not left behind, and they prepared paper hats decorated as the four DNA bases. Heather Jeffery said: “As my first experience of doing outreach in primary schools, I found it both exciting and highly rewarding. The children picked ideas up very quickly and it was interesting to work with a variety of age groups.”

Dr Yoel Klug (Carvahlo lab) taught Year 5 pupils in St. Nicholas Primary School about the organelles which make the cells. To explain the roles of the different organelles, he used metaphors from our everyday lives. For example, the mitochondria are a power plant as they provide energy to the whole cell; the Golgi apparatus is a postal sorting office, delivering cargo from one place to another, etc. Dr Klug also held a successful stand in the school’s science fair, where pupils in all ages could create their own cell models using arts, crafts and plenty of glitter.

One of the Year 5 teachers wished to thank Dr Klug for the lesson he taught in her class. She said: "Thank you [Dr. Klug] very much for coming to talk to Year 5 about organelles. This was completely new territory for children and adults alike, and a fascinating insight into another world”. Dr Klug’s experience was equally special. He said: “I underestimated how interested children would be in science and the micro aspects of it, i.e. interested in things they cannot see such as cells and organelles. I was also pleased to see that the children were very much interested in ‘life as a scientist’ and ‘what it means to be a scientist’. This has been a very special experience for me.”

The STEM week activities put science and scientists in the national spot light for a few days. The Dunn School takes special pride in its public outreach during this week and throughout the year.