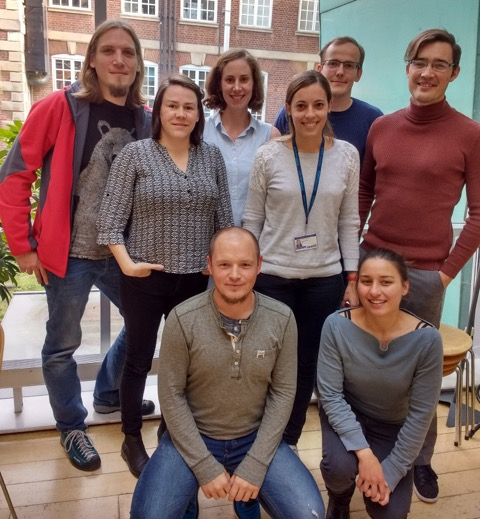 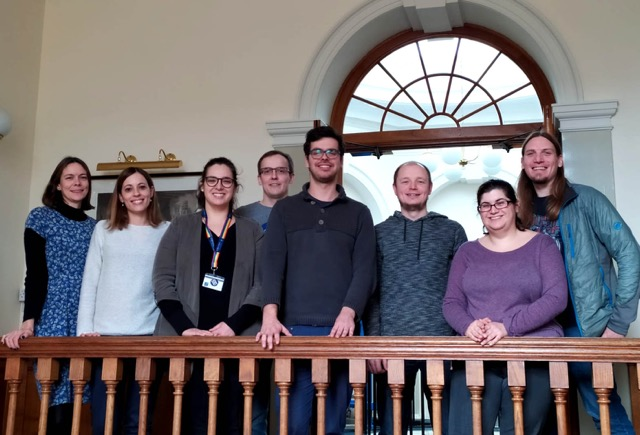 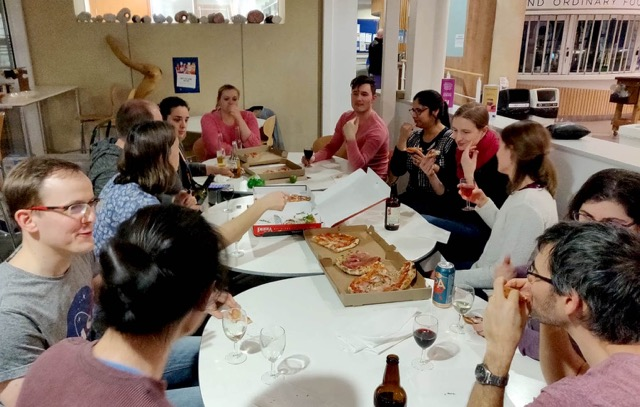 Informal pizza evening from the donation to the PDA

The Postdoc Association (PDA) at the Sir William Dunn School of Pathology brings together over 120 postdoctoral scientists working in the department, by providing a platform for discussion and exchange of ideas, and by giving a voice to the postdoc community while also reaching out to the rest of the department. Recently, it was announced that the current chair and co-chair of the Postdoc Association, Dr Anna Caballe (Raff lab) and Dr Gytis Jankecivius (I. Ahel lab), are leaving their roles at the end of February 2019.

The Dunn School PDA, formed in 2013, was one of the first in Oxford and aims to strengthen contacts between postdocs and increase the cohesivity of this group. The PDA committee consists of a group of volunteers from labs across the Dunn School that organise a range of social and career-oriented activities; including newcomers support, postdoc coffee meetings, a monthly departmental social gathering (Dunn drinks), the Postdoc Mentoring Scheme, workshops and different academic and non-academic career talks. Anna and Gytis, who have been actively involved in the PDA since 2016, highlighted the achievements and impact of the PDA’s team initiatives over the last 3 years have had in an open letter addressed to the postdoc community. Anna and Gytis wrote: “It’s the people that make the place – we’ve worked alongside a fantastic group of people who became esteemed colleagues and friends, we have interacted with the Dunn School PIs, the Head of Department… and have developed an invaluable array of ‘soft skills’.” As part of their final reflections, they added: “All of this has come with dedication, time investment, many emails, laughter and the occasional intense discussion, but most importantly, it hasn’t hindered our scientific research, and has just made our time at the Dunn School much more enjoyable!”

Head of Department Professor Matthew Freeman, praised the departing PDA members and thanked them for their efforts by writing in his monthly newsletter: “The Dunn School PDA was one of the first in Oxford and is a model that is now being replicated in other departments. Indeed, when I occasionally do site visits as a member of scientific advisory boards at other institutions, I always recommend that establishing a PDA should be high on their list of priorities.”

This change in the PDA leadership agreeably coincided with an anonymous gift from a Dunn School donor that wished to thank the members of the PDA for taking such an active role in organising activities and playing a key role in supporting the departmental community. With the donation, the PDA organised an informal pizza and drinks reception at the Dunn School on the 20th of February for around 15 postdocs involved in the PDA committee, the organisation of the upcoming Postdoc Symposium and of workshops and talks throughout the year, which also included graduate students.

From March 2019, the Dunn School PDA will be chaired by Dr Andreia Albuquerque-Wendt (Gluenz lab) and co-chaired by Dr Dima Batrakou (Niedusynski lab). There are currently 8 postdocs actively involved in the PDA committee, who will continue to organise social and career events for Dunn School postdocs. They also have a series of events planned in collaboration with the Biochemistry and the Physiology, Anatomy and Genetics Postdoc Associations.

The PDA is always keen on hearing from new postdocs joining the department and is an open group that welcomes everyone. Anyone interested in getting involved should visit the Postdoc Association website and/or email the PDA committee.