THIS IS A JOINT DPAG/ DUNN SCHOOL HOSTED SEMINAR

Doctrines of equilibrium behavior have long dominated the sciences; in physiology, the equilibrium paradigm is embodied in the principle of homeostasis. The mathematical model of an equilibrium process is a stable equilibrium point of a differential equation, typically representing a negative feedback loop. But physiological quantities are, in fact, not in static equilibria. Bistability (the emergence of biological “switches”), stable oscillations, chaos, and spatial pattern formation are the most important forms of nonlinear behavior in physiology.

We will review some simple mathematical models that display these nonlinear behaviors, and discuss their applications to the control of gene expression, cardiac arrhythmias, and the embryological development of branching in the lung.

In each case, the use of mathematical modeling has led to new kinds of mechanisms underlying physiological processes. 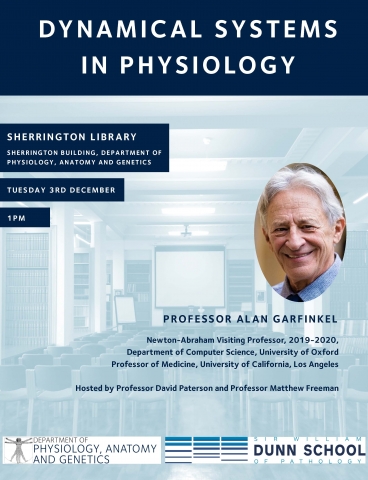