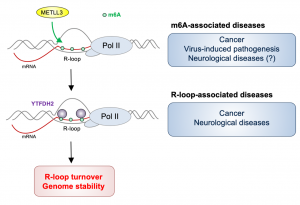 RNA, a nucleic acid important for protein production and regulation, consists of only 4 bases. However, a large amount of variation can be achieved by adding modifications. One such modification is N6-methyladenosine (m6A), where the adenosine in RNA has a methyl group (-CH3) added. Therefore, the genomic language can be more complicated than at first sight.

Natalia Gromak’s group from the Dunn School, in collaboration with Alexey Ruzov’s group at the University of Nottingham and others, has identified a role of m6A in the regulation of genome stability in human pluripotent stem cells. They found it performs this role through control of the number of R-loops. These structures consist of a RNA:DNA hybrid and unpaired single-stranded DNA and are involved in regulating gene expression and telomere length. It is important to regulate R-loop numbers as an excess of these structures can lead to cell growth retardation and an increase in DNA double-strand breaks, associated with neurodegeneration and cancer.

The researchers found that the number of R-loops containing m6A on the RNA portion varied throughout the cell cycle, rising in levels during the lead up to mitosis. By investigating a knock-out cell line, they identified that an increase in m6A in R-loops leads to mRNA degradation through the m6A reader YTHDF2. Therefore, m6A in R-loops acts as a signal to promote R-loop removal. This is important for maintaining genome stability and healthy cells.

N6-methyladenosine regulates the stability of RNA:DNA hybrids in human cells