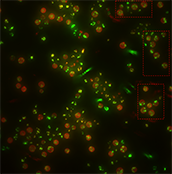 Getting Lipid Droplets in shape via Ldo proteins

Cells store excess of energy as fat in dedicated organelles called Lipid Droplets (LDs). How the size and number of these energy stores are regulated by metabolic signals remains largely unknown. Employing yeast as a model system, Teixeira et al, identify a group of  Lipid droplet organisation (Ldo) proteins that regulate key components of LD biogenesis machinery. They also demonstrate that the relative abundance of Ldo proteins responds to metabolic signals which in turn feed onto LD shape and composition. Interestingly, this relationship gains special prominence  during nutrient starvation, a condition that triggers consumption of energy stored in LDs. This study sheds light on a new dimension of LD behaviour and dynamics, which ultimately may help better understand various metabolic disorders such as diabetes and obesity.

Adam Volanakis and Kinga Kamieniarz-Gdula in the Proudfoot lab at the Sir William Dunn School of Pathology, have identified a new role for a kinase that connects transcription termination and mRNA export to the cytoplasm.

These two processes occur sequentially in the overall process of gene expression. Previously, connections between the mRNA export machinery and other processes have been shown, for example a physical link to the pre-mRNA splicing machinery is made through an interaction between UAP56 and Aly. The new findings by Volanakis et al identify a new connection between mRNA export and transcription termination, mediated by phosphorylation; a post-transcriptional modification regulated by a kinase.

The kinase in question, WNK1, is known for regulating ion homeostasis in the cytoplasm. However, Adam and Kinga have identified that upon nuclear localisation it phosphorylates a specific domain of a termination factor named PCF11. This domain is important for interacting with RNA polymerase II, which is the transcription motor. The phosphorylation of PCF11 weakens this interaction and promotes transcript release. Subsequently, the newly released mRNA is free to be exported to the cytoplasm, thus linking the transcription and mRNA export processes. 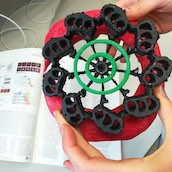 Centrioles are small organelles that sit at the base of two cellular structures: cilia (motile or sensory) and centrosomes (organise spindle microtubules during mitosis). There is increasing evidence linking centrosomes and cilia dysfunction to a plethora of human pathologies, including cancer, obesity, microcephaly and dwarfism. Understanding the molecular mechanisms that regulate the assembly of these organelles is important from both basic biological and clinical perspectives.

Recent work from the Raff lab, in collaboration with Micron Oxford, has uncovered the localisation of some of the core proteins that make up centrioles at nanometre-scale resolution –with » 4 nm precision. Gartenmann et al. combined two super-resolution microscopy techniques, 3D-structured-illumination (3D-SIM) and single molecule localisation microscopy (SMLM or STORM), to generate the first detailed map of how proteins are arranged across centrioles in Drosophila melanogaster. This method, together with a unique image analysis code, could be used to unveil the distribution of molecules in high precision within other cellular organelles, such as nuclear pores or cilia/flagella, and will allow scientists to better understand how key cellular organelles work in health and disease. 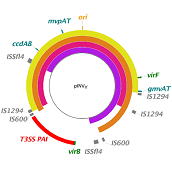 Shigella is a major agent of diarrhoeal disease worldwide causing 188 million cases and 600,000 deaths annually. Shigella emerged from non-pathogenic Escherichia coli, by acquiring a large plasmid (pINV), an essential virulence factor. The plasmid contains a pathogenicity island (PAI) encoding aType III Secretion System (T3SS) - placing a large metabolic burden on the bacterium. Spontaneous expression loss of the PAI is observed in laboratory grown Shigella, raising the question: what are the molecular mechanisms that mediate this event?

Pilla and colleagues discovered that in Shigella flexneri repeated sequences, present on the plasmid and the chromosome, mediate deletion of the PAI or reversible integration of the plasmid into the chromosome. Following integration, the expression of T3SS is down regulated and excision of the plasmid is sufficient to restore virulence. Hence, integration provides a strategy for regulating T3SS expression; allowing the bacteria to stay competitive, yet maintain this taxing but essential element over time. This study allows researchers to understand the molecular mechanisms that govern virulence maintenance andhow changes inplasmid can influence the evolution of this important pathogen. 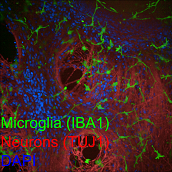 Microglia are important phagocytic cells of the brain. These specialised cells not only function to remove debris, but are also widely associated with a high expression of genes implicated in various neurodegenerative diseases. Till quite recently, there was a paucity of in vitro human models which could facilitate the study of these brain resident cells. To circumvent this problem, Haenseler et al., developed an elegant technique which involves the co-culture of human Induced Pluripotent Stem cell (iPSC) derived macrophages with iPS-neurons to transform the former into microglia. The resulting microglia and neuronal co-cultures appear to be stable for many weeks. More importantly, microglia derived via this technique display all the relevant genetic and phenotypic expression markers, and produce a distinct signature of cytokines specific to a co-culture model. This technique appears to be far superior to monocultures of microglia or transformed microglia lines, known to rapidly lose their identity. This study  opens up the possibility of modelling various neurodegenerative diseases in a dish.