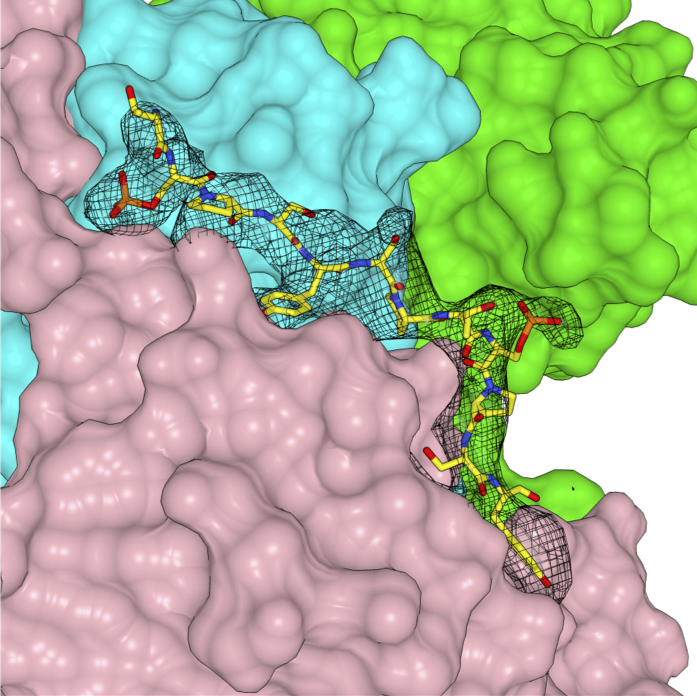 Deciphering the mode of action of the influenza virus transcriptase

Curtailment of the spread of influenza virus has long been a subject of great interest and research. The influenza virus RNA polymerase performs both transcription and replication of the viral RNA genome. For transcription, it associates with host RNA polymerase II (Pol II) and steals nascent host capped RNA fragments that it uses as primers. Recent work has shown that the viral polymerase can assume multiple conformations, corresponding to different functional states, but much less is known about the factors that regulate these states and its mode of action. 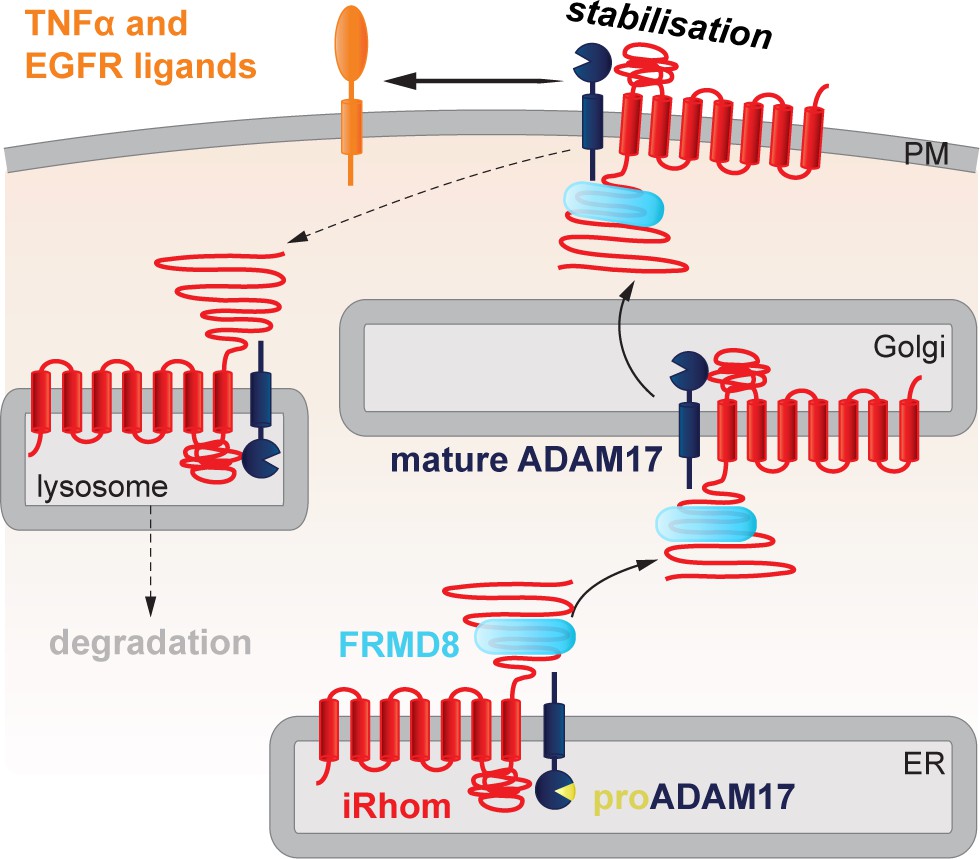 A schematic showing how FRMD8 stabilises the ADAM17/iRhom complex, preventing its degradation.

Cell communication requires the controlled release of signalling proteins, which act as messages that can be sent and received by cells. These messages must be sent in adequate quantities and at appropriate times. A protein called ADAM17 aids in the release of many signalling proteins from the cell surface, most notably the inflammatory cytokine, TNFα. ADAM17 itself forms a complex with proteins known as iRhoms, which modulate its activity. However, little is known about how iRhoms are regulated.

Researchers from the Freeman lab carried out a proteomic screen to search for binding partners of iRhoms. Their top hit was FRMD8, which appears to stabilise the ADAM17/iRhom complex at the cell surface through its interaction with iRhom2. The absence of FRMD8 leads to the degradation of the complex. Künzel and colleagues functionally validated this phenomenon in macrophage cells, finding that FRMD8 KO macrophages release lower levels of TNFα. Improper TNFα release can result in inflammatory diseases like rheumatoid arthritis, thus suggesting that this study may guide future anti-inflammatory drug targets. 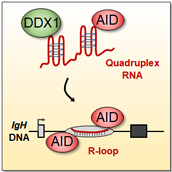 Antibodies (immunoglobulin proteins) are crucial to the adaptive immune system. They recognise specific pathogens, and can trigger different downstream immune responses through the immunoglobulin heavy chain (IgH). Different versions of IgH protein are generated by Class Switch Recombination (CSR), a physical recombination of the DNA encoding IgH. CSR is mediated by the AID enzyme. Mis-targeting of AID to non-IgH DNA is associated with B-cell lymphomas.

In this collaborative study, Claudia Ribeiro de Almeida from the Proudfoot lab together with Dunn School colleagues Amin Moghaddam and Quentin Sattentau use a variety of molecular assays and an in vivo mouse model to explore the role of non-coding RNA in targeting AID to IgH DNA. They show that ncRNA forming quadruplex structures can be rearranged into RNA-DNA hybrid structures (R-loops) by the enzyme DDX1 (an RNA helicase). This novel mechanism for conversion from RNA-only to RNA-DNA structures explains how ncRNA acts as a targeted vehicle to recruit AID to the correct DNA sites for CSR. The study comprises the first direct role of the much-studied DDX1 in adaptive immunity.

R-loops are unusual nucleic acid structures comprising both RNA and DNA components. They play key roles in the cell, for instance in DNA transcription and replication, but when mis-regulated they are associated with DNA damage and pathologies, including neurological disorders. Yet little is known about which factors are involved in R-loop regulation.

To address this, researchers from the Gromak lab used affinity purification and mass spectrometry to identify 469 proteins which interact with RNA/DNA hybrids (an ‘interactome’). This included helicases such as DHX9, whose role in R-loop biology had not been previously characterised. To validate hits from the interactome, Cristini and colleagues demonstrated that DHX9 helicase plays a role in suppressing the formation of R-loops and promoting the termination of transcription in vivo. They postulate that the helicase may travel along a gene, quelling R-loops as it travels. They also found that DHX9 acts to reduce DNA damage induced by R-loop accumulation.

Interestingly, DHX9 expression is overexpressed in cancer. Combined with their functional study, this highlights the value of the Gromak lab’s RNA/DNA interactome for investigating how R-loop regulation might contribute to human disease. 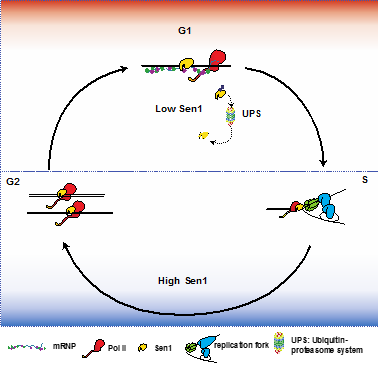 Terminating transcription, the process by which RNA is generated from a DNA template, is crucial to the normal functioning of cells. In budding yeast, transcription of many non-protein-coding RNAs is terminated by a distinct complex called NNS, which comprises three proteins — Nrd1, Nab3 and Sen1. The catalytic component of the complex, Sen1, is present at much lower numbers than Nrd1 and Nab3, raising questions as to how this complex can efficiently operate.

Hannah Mischo (Proudfoot Lab) and colleagues have demonstrated that Sen1 is regulated throughout the cell cycle. Sen1 levels increase in S and G2 phases, during which the cell duplicates its DNA and prepares for cell division respectively. In G1 phase, during which the cell grows and synthesises messenger RNA and proteins, Sen1 levels are lowered. This downregulation is carried out by the ubiquitin-proteasome system, in which proteins are tagged with ubiquitin and targeted for degradation. When the modulation of Sen1 is perturbed, cell survival is affected due to the toxicity caused by excessive termination of transcription. This study provided insights into the regulation of transcription termination during the cell cycle. 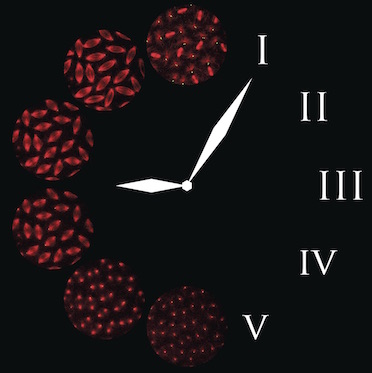 Centrioles are organelles that perform key functions during cell division -as part of centrosomes- and ciliogenesis. These small structures are duplicated in each cellular division via the growth of a daughter centriole from the side of its mother. While the regulation of centriole and centrosome number in cells has been well characterised, the mechanisms controlling centriole growth have remained elusive to date.

Aydogan and colleagues (Raff lab) have used live imaging of early fly embryos, coupled with quantitative tools, to report a novel function for Polo-like Kinase 4 (Plk-4) in regulating centriole size. They observed that Plk4 drives centriole growth by linearly promoting the addition of building blocks (Sas-6 molecules) onto the proximal side of daughter centrioles throughout early/mid S-phase and halting growth once centrioles have reached their correct size. This homeostatic clock role of Plk4 is attributed to its predicted suicidal activity – the more active the kinase is, the faster it triggers its own degradation. This study sheds light on an enzyme that acts as a clock to control centriole growth and proposes a novel mechanism for organelle size regulation. 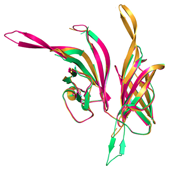 A crystal structure of a chimeric antigen composed of a PorA extracellular loop grafted onto an fHbp molecular scaffold.

Vaccines against bacterial pathogens, mostly based on the pathogens’ toxins or capsules components, have been revolutionary for human kind. However, these approaches are not feasible for pathogens such as serogroup B Neisseria meningitidis – where vaccine development has been impeded by pathogen diversity, the inability to use capsule-based vaccines and technical difficulties of generating antigens from membrane-embedded proteins. A solution for this problem is critical due to the rise of multi-drug resistant bacteria.

Hollingshead and colleagues have begun to address this problem by engineering chimeric antigens (ChA) consisting of two different N. meningitidis proteins. ChAs contain the protein fHbp as a molecular scaffold on to which they have engineered a critical region, the VR2 loop, from the membrane-bound protein PorA. They found that the ChAs retain the architecture of fHbp and the VR2 loop. The ChAs were also able to successfully elicit protective immune responses in mice against both protein antigens.

This proof-in-principle study demonstrates that ChAs can present important parts of membrane-bound proteins to the immune system and initiate an immune response, opening the door to a new generation of multivalent vaccines. 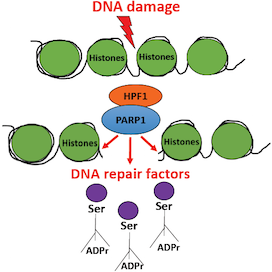 Cells have a complex protein machinery that activates a repair response after detecting damaged DNA. One of the mechanisms used to regulate the function and localisation of these proteins is the addition of molecules onto their building blocks (amino acids) that modify their behaviour.

Work from Ivan Ahel’s lab, together with collaborators at the Max Planck Institute in Cologne (Germany), has revealed that serine is the preferred amino acid of a family of modifying enzymes responsible for ADP-ribosylation (ADPr) – a protein modification regulating cellular processes, including the vital activation of DNA repair responses at DNA breaks. Palazzo et al. used cell biology and biochemical approaches to show that serine residues of histones (proteins that package DNA) become the main ADPr sites after DNA damage. Together with their previous work identifying the ‘eraser’ of serine ADPr, which enables the process to be reversed, this shows how proteins involved in DNA damage repair can be switched on/off in different physiological and pathological conditions. This knowledge could be used to develop new cancer drugs regulating ADPr signals and, therefore, controlling DNA repair.

Autophagy is an evolutionarily conserved “self-devouring” process by which cells may degrade intracellular components, and is particularly important for recycling intracellular materials during periods of stress or starvation. In addition, it is also important in other physiological roles, such as the intracellular immune response. Autophagy genes such as ATG16L1 have been associated with inflammatory bowel disease (IBD); however, it is not known how autophagy regulates tissue homeostasis in the inflamed intestine.

Dr. Johanna Pott and colleagues in the Maloy Lab use cell-specific knockouts of the ATG16L1 gene in mice and intestinal stem cell (IEC) organoids to discover that autophagy was required in IECs to limit TNF-induced apoptosis in the epithelium during inflammatory conditions. Their work highlights the important role of autophagy in maintaining barrier integrity, by limiting cell death to reduce inflammation, and reveals a link between apoptosis and autophagy in intestinal epithelial cells. Additionally, the study indicates the potential role of anti-TNF based treatments in IBD patients in boosting epithelial barrier integrity. 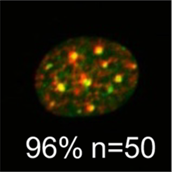 Colocalisation of phosphorylated Dicer (green) and a DNA damage marker (red) in the nucleus of a mouse cell upon induction of DNA damage.

The endoribonuclease Dicer is an integral component of the RNA interference pathway. Dicer generates small RNA species that regulate post-transcriptional gene silencing in the cytoplasm. However, increasing evidence indicates that Dicer has additional, non-canonical roles in the nucleus. Previous localisation studies with over-expressed tagged Dicer, yield limited and inconclusive insight in to the regulatory principles of nuclear Dicer localisation. To address the controversy in the field, Burger and colleagues have begun to unravel the cellular mechanisms that determine Dicer’s localisation when Dicer levels are kept physiological.

This study, performed in mouse cells, ensured endogenous expression levels of tagged Dicer. Burger and colleagues firstly assessed the localisation of Dicer in unperturbed cells. They show that approximately 5% of Dicer molecules localise to the nucleus under physiological conditions. Upon induction of DNA damage, in particular double-strand breaks, they found a 2-3 fold increase in nuclear Dicer localization. Under these conditions, >90% of nuclear Dicer was phosphorylated in a PI3K-dependent manner. Their findings suggest that damage-induced PI3K-signaling establishes distinct populations of Dicer, hinting at novel functions and complex regulation of RNAi components.