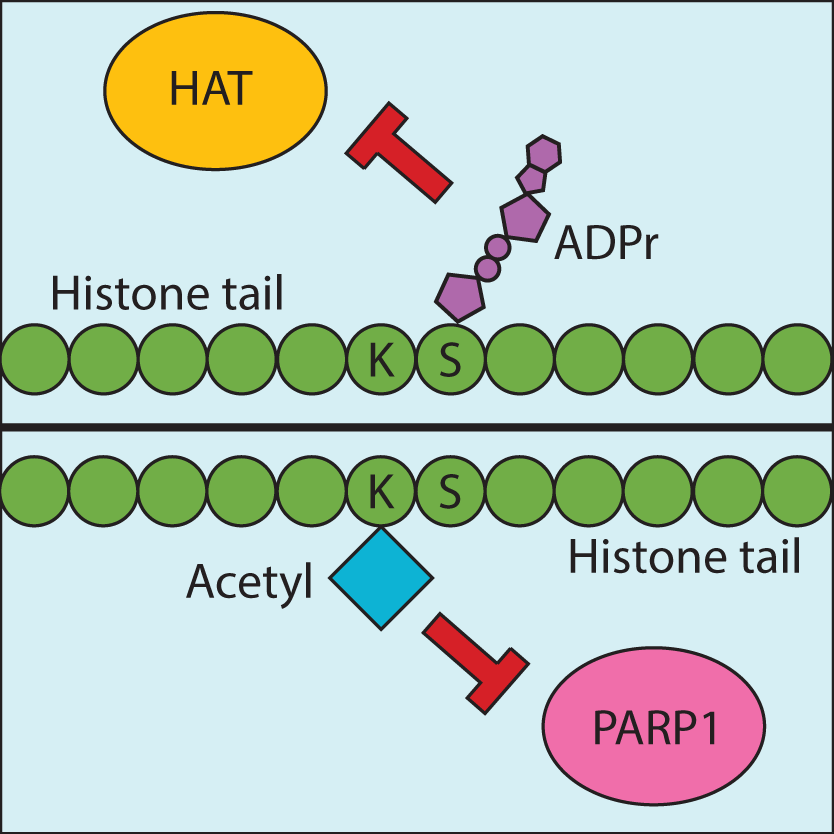 Post-translational protein modifications (PTMs) are important for the regulation of many cellular processes. Of these, ADP-ribosylation (ADPr)—the reversible addition of ADP-ribose molecules—of histones can be particularly important for DNA damage response. Previous work in Ivan Ahel’s lab found that ADPr on serine residues (Ser-ADPr) is the most prominent type of ADPr following DNA damage. Prior to this, the exact location of ADPr on many proteins, including histones, remained elusive. Furthermore, the study of ADPr and other histone PTMs had never intersected before, despite how different combinations of histone PTMs act together in a code to regulate important nuclear functions.

In this study, Bartlett et al., examined the interplay of histone marks, and introduced a simple method to detect Ser-ADPr peptides, overcoming limitations on currently available techniques. The study reveals how Ser-ADPr is mutually exclusive with proximal phosphorylation and acetylation—other PTMs—at N-terminal tails of histones. These results indicate that the context of the local histone code affects Ser-ADPr, and vice versa. Additionally, they discovered that tyrosine residues can also undergo ADPr, whose physiological relevance is still unclear. 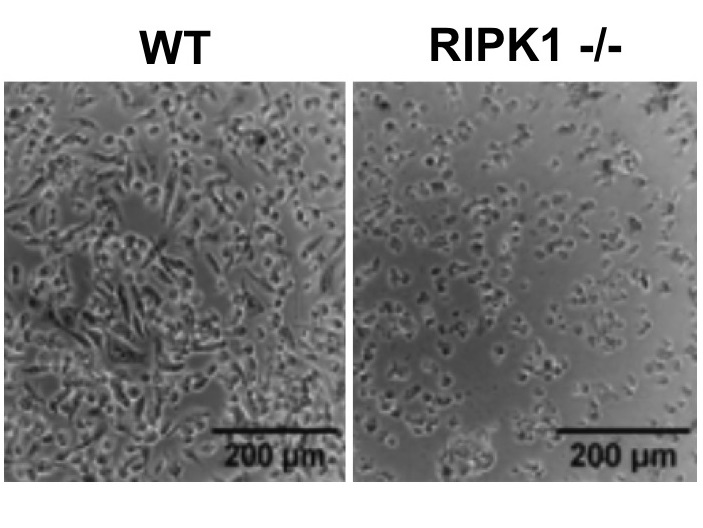 RIPK1 is essential for macrophage viability

To die or not to die, RIPK1 is the answer

Macrophages are important cells in our innate immune system, whose primary roles are maintaining tissue integrity through defence against pathogens, clearing cell debris and regulating stem cells. For these roles, macrophages employ two distinct strategies: inflammation and cell death, which prevents the spreading of the pathogen. Similar to powerful weapons, these can easily turn into a harmful double-edged sword, and therefore must be carefully controlled.

Previous studies suggested that RIPK1 has a crucial role in proper macrophage activation. When RIPK1 is experimentally lost, however, macrophages fail to develop and eventually die, making its role difficult to decipher. Dr Julian Buchrieser and colleagues in the William James lab have collaborated with colleagues from Universidad de Sevilla (Spain) to uncover the role of RIPK1 in macrophage activation. They generated induced pluripotent stem cells and deleted RIPK1 from their genome by using the genome-editing tool of CRISPR-Cas9. This method allowed them to control and track every step of macrophage development. Thanks to their fine-tuned dissection, they found that RIPK1’s main role is to protect macrophages from dying, while their inflammatory activity is unaffected. 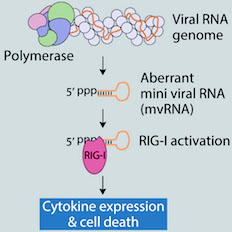 Influenza virus is a pathogen that plagues society in the form of flu. 2018 marks 100 years since the ‘Spanish flu’ pandemic that, according to the World Health Organisation, infected a third of the human population worldwide and led to more deaths than World War I. The influenza virus contains its genetic information in the form of RNA instead of DNA and relies on infecting a host cell in order to replicate.

Researchers in the Fodor lab have identified a link between influenza virus infection and the infected cell response. This takes the form of mini-viral RNA (mvRNA) and is produced by dysregulated viral RNA replication. These mvRNA molecules bind to and activate retinoic acid-inducible gene 1 (RIG-1), which starts a signalling cascade resulting in cytokine production and cell death. The most harmful influenza virus strains, including the 1918 pandemic strain and the H5N1 bird flu, produce high levels of mvRNA. Understanding the mechanisms of mvRNA production and their contribution to virulence is important for developing ways to combat future viral strains. 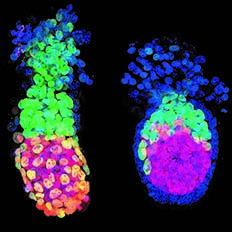 Determining the fate of cells during embryonic differentiation

During embryonic development, key signalling cues dictate cell fates and allow specification of different cell populations. Three of these cues are Nodal, an extracellular ligand of a family of growth factors (TGFb), and Smad2 and Smad3, the downstream effectors inside the cell responsible for determining the head-to-tail axis of the embryo. Previous genetic studies showed that Smad2/3 double-mutant mouse embryos die shortly after implantation, yet the underlying molecular mechanisms remained unknown.

Senft and colleagues in the Robertson and Bikoff labs have recently characterised the effects of Smad2/3-deficiency in mouse embryonic stem cells (ESCs) using in vitro differentiation protocols. They found that Smad2/3 signalling is required to maintain embryonic and extra-embryonic cell identities, and to undergo key cell fate allocation steps during embryonic germ layers differentiation, in the pre-implantation mammalian embryo. Additionally, the balance of signalling pathways during neural precursor differentiation was not properly maintained in these mutant ESCs, with Nodal target genes being downregulated and Bmp upregulated. This detailed molecular study of the signalling in early mammalian development widens our comprehension of the genetic programs involved in embryonic post-implantation development. 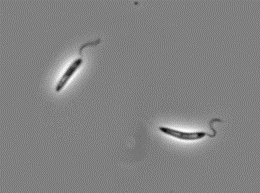 Flagella are tail-like structures that beat to propel single-celled organisms along. The moving flagellum resembles a wave. Some parasites, such as Trypanosoma and Leishmania, can change their direction by adjusting where this wave starts.

Researchers from the Gull Lab have found that this ability is afforded by breaking the flagellum’s symmetry. They showed that a class of proteins, known as ODA-docking complexes (DCs), are unevenly distributed along trypanosome flagella. Some (dDCs) sit at the flagellum tip, while others (pDCs) sit nearer the cell body. Mathematical modelling suggested that this pattern is achieved by a process called intraflagellar transport (IFT) that constantly moves pDC towards the base. This frees up binding sites at the opposite end, which dDCs can fill.

This asymmetry is important for wave initiation; the localisation of a novel protein (‘LC4-like’), which acts as a molecular switch to change where the wave starts from, is dependent on dDC. This study explores why parasites are such expert movers and shakers and may also have implications for human health; DC mutations can cause ciliary dyskinesia, a disease characterised by inefficient ciliary movement. 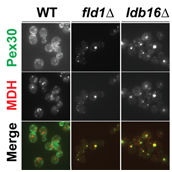 A common birthplace for distinct organelles

Membrane-bound subcellular compartments (or organelles) are the hallmark of eukaryotic cells. Lipid droplets (LDs) and peroxisomes are distinct organelles at the centre of cellular metabolism; their dysfunction is linked to devastating diseases in humans, including diabetes and neurodevelopmental disorders. Both are thought to ‘bud off’ from the endoplasmic reticulum (ER), the cell’s largest organelle. However, how their assembly sites are defined and the mechanism by which they bud from the ER remained mysterious.

A recent study by Sihui Wang from the Carvalho lab and colleagues has uncovered that these structurally distinct organelles share their birthplace at specific ER domains. Using lipidomics, microscopy and genetic strategies in yeast, Wang et al. explore the cooperation of the protein complex Seipin and the membrane-shaping protein Pex30. They show that these factors facilitate LD and peroxisome formation by organising membrane regions of a lipid composition that favour budding. Their data advocate a new model for LD and peroxisome biogenesis, which paves the way for understanding the mechanisms of organelle formation at the ER. 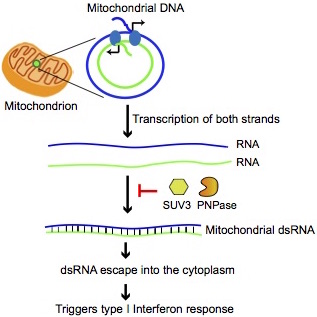 Nucleic acids from within the cell can activate antiviral response

Mitochondria, which generate energy for the cell, are descendants of endosymbiotic bacteria and possess a bacteria-like genetic make-up—a dense, circular genome. Mitochondrial DNA is transcribed on both strands, potentially leading to the generation of double-stranded RNAs (dsRNAs).

In this collaborative study, Ashish Dhir and colleagues from the Proudfoot lab, together with researchers from the US, France, Poland and Scotland, established that mitochondria are major sites of dsRNA generation in human cells. They identified the key factors that regulate the amounts of these dsRNAs—SUV3 and PNPase. In the absence of PNPase, mitochondrial dsRNAs leak into the cytoplasm and trigger an interferon response which is typically turned on in response to viral and bacterial infections. Interestingly, they found that mitochondrial disease patients with mutations in the gene PNPT1, which encodes PNPase, have increased levels of mitochondrial dsRNA and markers of immune activation, and an activated interferon response. In combination these changes can lead to autoimmunity in humans.

This study provides insights into how the cell processes a damaging internal source of nucleic acids to prevent unnecessary immune system activation. 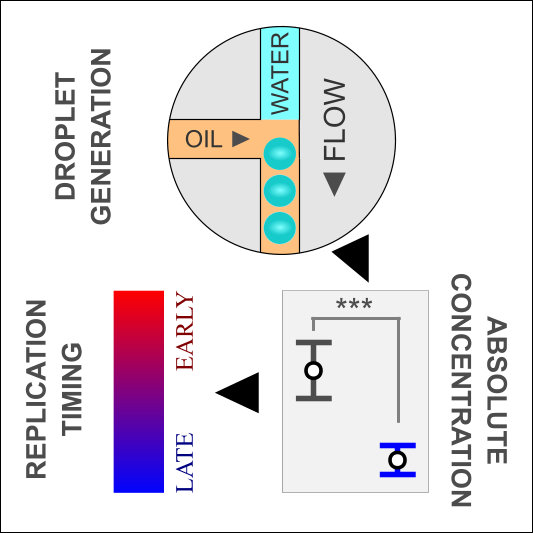 A rapid and inexpensive method to measure DNA replication timing

DNA replication is a fundamental property of life, passing genetic information down generations of cells. The timing of replication in organisms with larger genomes follows a defined and reproducible programme. How this is coordinated is poorly understood, as changes to replication timing have been involved in various human disorders.

To measure replication timing, researchers use measurements of DNA copy number as a proxy. However, current methods are time-consuming and/or expensive—especially for organisms with larger genomes. Dzmitry Batrakou and colleagues in the Nieduszynski lab utilised droplet digital PCR (around 1nl in size) to rapidly measure DNA copy number with high throughput, bypassing the need for expensive microfluidics devices. Not only is this method comparable to the best spatial and temporal resolution in current methods, it is also applicable to cultured human cells. The work uses this method to rapidly screen mutants to study locus-specific perturbations of replication timing and identify mechanisms that regulate local genome replication. In addition, the method may also be used to study other aspects of chromosome biology, such as Homologous Recombination, making it a valuable tool for research. 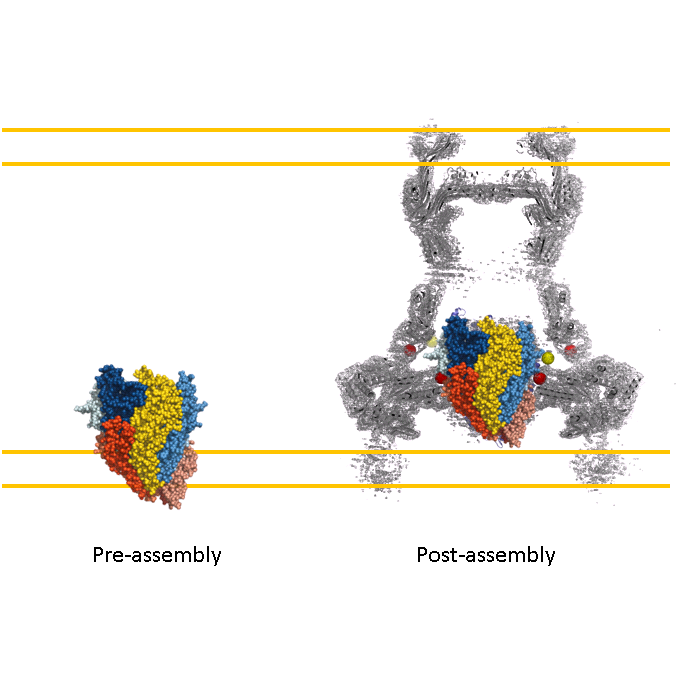 Type III secretion systems (T3SS) are believed to act as nanomachines, which reside in the bacterial cell envelope and allow the passage of proteins. They are critical for building bacterial motility organelles and injecting toxins into host cells. Three putative integral membrane proteins namely P, Q and R, are believed to form the pore in the cell envelope called the export gate of these machines, with their structure remaining unresolved till date.

Kuhlen and colleagues have employed a combination of biochemistry, native mass-spectrometry (nMS) and cryoelectron microscopy (cryo-EM) techniques to investigate the structure and assembly of the nanomachines. They report a 4.2A resolution Cryo-EM structure for the PQR complex, in which none of the components assume a predicted integral membrane conformation. Excitingly, common helix-turn-helix structural elements allow them to form a helical assembly above the membrane. Additionally, they propose a mechanism of how the export gate opens. Their structure not only reveals the molecular architecture of the core of T3SS, but also has more general implications for predictions of membrane protein structure-function relationships. 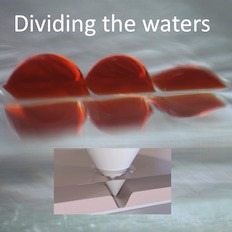 Microfluidics deals with very small volumes of liquids (under 1µL). While cell biologists often manipulate tiny volumes, they do not normally use microfluidics due to the cost and complexity of manufacture, concerns with biocompatibility and the inaccessibility of cells once introduced into such enclosed spaces.

In a collaborative study between the Cook lab at the Dunn School of Pathology and the Walsh lab at the Department of Engineering Science, Soitu and colleagues have developed a revolutionary method for cell biologists to create microfluidic arrangements containing sub-microlitre volumes. They reshaped fluids on a substrate and exploited interfacial forces (or surface tension – the elastic tendency of a fluid surface to acquire the least surface area possible) at the microscale level. In this platform, liquids are confined within fluid (not solid) walls formed by the interface between water and an immiscible liquid (a fluorocarbon). These walls spontaneously seal around inserted pipettes, and self-heal when they are withdrawn. This method provides an accurate, simple and customisable approach for fabrication of microfluidic devices using materials that are familiar to biologists.