Major contributions to Pathology: Rebecca Lancefield is best known for the Lancefield classification system for beta-haemolytic Streptococci – still in use today, including the BM practical classes! In the 1920s she discovered the M protein on the surface of pathogenic bacteria – it is on the basis of these variations that Streptococci can be classified. Lancefield was also amongst the first to show that Strep. pyogenes infection was the cause of rheumatic fever (and that the alpha-haemolytic Strep. viridans was not). 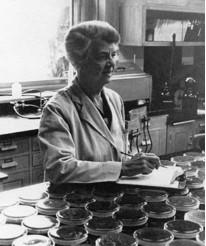 Born in 1895, Rebecca Craighill went to the all-female Wellesley College to study English, though thankfully for the science of bacteriology, she changed her major to Zoology. She continued her education at New York’s Columbia University in the lab of Hans Zinsser (who isolated the typhus bacterium and developed a vaccine against it) here she met her future husband David Lancefield.

Rebecca then worked with Oswald Avery (who would later discover that DNA was the carrier of genetic information) at the Rockefeller Institute during WWI to look at whether soldiers in Texas were infected with different types of Streptococci. It was here in 1919 that she published the first of over 50 scientific papers, in which four types of Streptococci were described.

During her work on Streptococci, Lancefield noted that there were not just four, but actually dozens of species, and that the M protein was both an essential virulence factor and a target for neutralizing antibodies. These antibodies were shown to be type-specific –explaining why repeated bouts of Strepotococcal infection and rheumatic fever were common, unlike other childhood infections such as chickenpox, in which recurrences were rare.

The substance that allows classification into Lancefield groups turned out to be not protein, but carbohydrate – though different M protein types allow distinction between different members of those groups. The test used to show to which Lancefield group a bacterium belongs is an immunoprecipitation test using specific antisera, which produces visible precipitates

An elegant experiment of Lancefield’s is her famous eggnog recipe – to convince her fellow scientists of the safety of consuming a drink that contained raw egg and hence Salmonella, a dose of bacteria was added to a batch of eggnog, samples of which were plated out at regular intervals. No viable bacteria were observed after 21 days, as the bacteria had been killed by the high alcohol content.