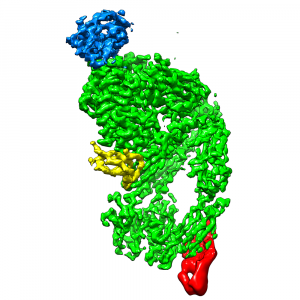 The human body defends itself from infection by utilising a complex and diverse array of weapons held by the immune system. One important element of the innate immune response is the complement system (also known as the complement cascade), which enhances the ability of immune soldiers such as antibodies to attack and destroy invading pathogens. Overactivation of the complement system can lead to adverse effects such as hyper-inflammation, autoimmunity, etc. A number of disease-causing organisms, including biting ticks, have evolved ways to suppress the complement system and can therefore overcome this attack. The prospect of identifying inhibitors of this system has long been sought, with the promise of therapeutic potential.

Martin Reichhardt and colleagues from Susan Lea’s lab have now uncovered a novel class of complement inhibitors, named the CirpT family, from tick saliva. They showed binding of CirpT1 to complement C5, one of the pointy ends of the complement pathway spear, via a site not targeted by already known inhibitors. Using cryo-electron microscopy and X-ray crystallography, they uncovered that CirpT1 obstructs the interaction and cleavage of complement C5 by C5-convertase, a critical final step in the complement pathway activation. The mechanistic insight into this unique mode of action by CirpT1 certainly provides a platform to further investigate the effect of other complement system inhibitors and also to design potential therapeutic agents.

An inhibitor of complement C5 provides structural insights into activation