Building complex circuits out of fluids

Building complex circuits out of fluids 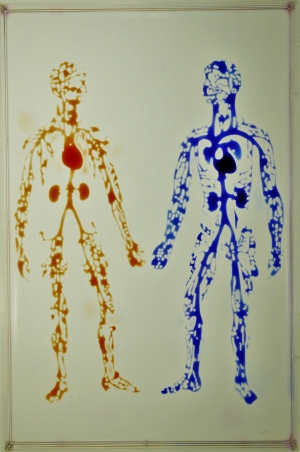 In biomedical research, ‘microfluidics’ refers to techniques used to manipulate samples, usually cells, through specially-designed devices and tiny amounts of fluid. Despite its great potential, uptake of microfluidics techniques by the biomedical community has been poor. The solid, often opaque walls of conventional microfluidic devices prevent essential physical and optical access to samples. Additionally, compatibility issues arise between what researchers need and what engineers produce.

To provide a solution to this problem, the Cook (Dunn School) and Walsh (Engineering Science) labs have developed a novel technology, ‘freestyle fluidics’, where the core idea is to replace solid walls confining liquids, with fluid ones. In a recent paper, they introduce a contactless method to build fluid walls, mostly using materials commonly found in bio-labs. Cell culture media is compartmentalised using a submerged micro-jet of a fluorocarbon (FC40) projected through the static layer of media onto the bottom of a conventional polystyrene cell culture dish. FC40 and water-based liquids, such as cell culture media, are immiscible, and thus the projected FC40 sweeps the media away to leave liquid fluorocarbon ‘walls’ pinned to the plate by interfacial forces. Such fluid walls can quickly be built into almost any imaginable 2D circuit. For instance, the image depicts the human circulatory system ‘drawn’ with an FC40 jet.

This work describes simple methods for miniaturizing common workflows in biology and provides solutions to various biomedical research problems, such as the use of irregular polygons to beat the troublesome Poisson limit in single-cell cloning while reducing reagent waste and costs, design of cell culture devices easily integratable into existing workflows, and even cell colony subculture without trypsin/EDTA, via the physical breakup of a clone using the momentum of the FC40 jet. The diversity and flexibility of this approach is expected to lead to widespread adoption of the technique for a variety of applications in biomedicine.