Bacteria use liquid crystalline armour to shield against antibiotics

Bacteria use liquid crystalline armour to shield against antibiotics 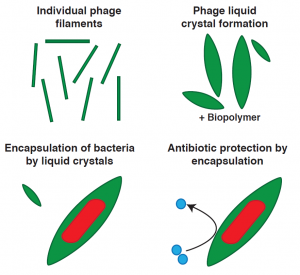 Pathogenic rod-shaped bacteria are responsible for causing many human infectious diseases such as meningitis and cholera. A wide variety of these bacteria are becoming tolerant to current antibiotics, rendering treatments ineffective. It is therefore of critical importance to understand the mechanisms used by these bacteria to evade antibiotics.

Abul Tarafder and colleagues from Tanmay Bharat’s group in the Dunn School have identified a mechanism by which the rod-shaped bacterium, Pseudomonas aeruginosa, can evade antibiotics by surrounding its cells with a self-made protective casing. The bacteria produce a symbiotic filament-shaped phage, Pf4, that phase-separates into spindle-shaped liquid crystals. These encapsulate bacterial cells, preventing effective concentrations of antibiotic reaching the cell, thus ensuring bacterial survival. Interestingly, the authors found that this phage-mediated antibiotic tolerance mechanism is profoundly influenced by biophysical size and shape complementarity rather than the biochemical properties of the phage and bacteria, as the phage liquid crystals could encapsulate inanimate rods of comparable size to bacteria. This suggests that the mechanism of encapsulation by protective casings could be a general strategy adopted by many bacteria to evade antibiotics. This new knowledge is applicable to a wide variety of pathogenic bacteria so could have widespread implications on the development of novel methods to combat antibiotic tolerance.